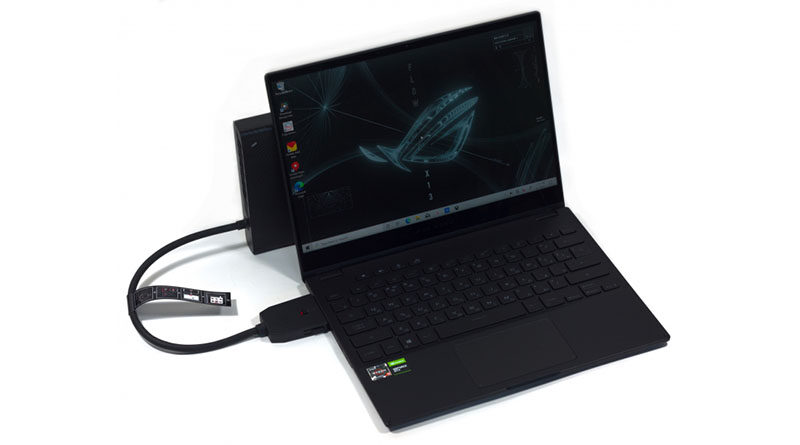 This year Asus presented a new and extremely interesting line of laptops, the main feature of which was the new model ASUS ROG Flow X13. AMD recently released a full palette of Ryzen 5000 CPUs based on the Zen 3 architecture for mobile computers, including flagship octa-core chips with power consumption up to 54 watts. It would seem that such a powerful silicon is suitable only for gaming laptops and workstations with a screen of at least 15 inches and the corresponding thickness of the case. On the contrary, ultrabooks should be content with a CPU with a TDP of 25 Watts. But no, several manufacturers have already introduced compact machines with a 14-inch screen based on full-power Ryzen 5000 chips.

But ASUS has surpassed everyone: we have a 13-inch convertible laptop with the second oldest eight-core Ryzen 9 inside, and also a discrete GeForce GTX 1650 Max-Q graphics card. There are no other 2-in-1 devices with similar characteristics on the market right now, but that’s not all: you can connect an external accelerator to the ROG Flow X13 — a mobile version of the GeForce RTX 3080. Moreover, although ASUS could not use the Thunderbolt interface for this purpose, it is replaced by an even faster proprietary solution.

The basis for the ROG Flow X13 is the latest AMD Ryzen 5000 processor platform. By itself, it carries a lot of optimizations that are important for a mobile computer, which are expressed in increased energy efficiency and an additional 19% of performance per clock. According to AMD, a simple change of the 4000-series chip to the Ryzen 5000 can add up to 2 hours of battery life, even if the other components of the laptop remain the same.

Moreover, from the entire Ryzen 5000 catalog, the creators of the laptop chose the second oldest model — Ryzen 9 5980HS, which, judging by the specifications, also works at increased clock speeds: 3.1 instead of the standard base frequency of 3.0 GHz (the upper mark remained at 4.8 GHz). The modifications of the ROG Flow X13 are simpler, instead of the Ryzen 9 5980HS, the Ryzen 7 5800HS is installed — this is also an octa-core with SMT support, but its clock speeds are reduced compared to the flagship positions.

All versions of the ROG Flow X13 are equipped with discrete GeForce GTX 1650 graphics in a Max-Q thermal package with 4 GB of dedicated GDDR6 memory, and the amount of system RAM is 16 or 32 GB. If you consider that LPDDR4X chips are always soldered on the motherboard, it’s good that ASUS offers the latter option. The size of the SSD is 512 or 1024 GB: more is not yet possible due to the fact that inside the ROG Flow X13 there is room only for the most compact M modules.2

Well, the most important thing in the ASUS ROG Flow X13, not counting the unprecedented powerful components for this form factor, is the ability to connect the 2021 ROG XG Mobile dock, which contains the latest generation NVIDIA video adapter – the mobile version of the GeForce RTX 3080. Recall that the RTX 3080 in the laptop version differs from the desktop video cards of the same name by the GPU itself: if the GA102 chips are sold under this brand in the desktop, then the second-tier GA104 chip replaces them in the laptops. Be that as it may, more productive graphics for mobile PCs today simply does not exist, especially if the GPU can use all the power reserve specified by NVIDIA. It is 150 watts, and, as you might guess, only select laptops with the appropriate dimensions allow the RTX 3080 to develop such power. But for the ROG XG Mobile box, this is not an obstacle. In addition, unlike desktop counterparts, the mobile RTX 3080 has up to 16 GB of local memory-this opportunity also did not fail to take advantage of ASUS.

A typical method of connecting external GPUs to a laptop is the universal Thunderbolt interface, which encapsulates PCI Express protocol packets and in recent iterations develops sufficient bandwidth for four PCI Express 3.0 lines. Alas, the fourth version of Thunderbolt does not remove this restriction, and all previous experiments with external graphics have shown that the PCI Express 3.0 x4 channel is completely insufficient to rock a modern high-performance GPU, especially if you have to return video to the laptop screen on the same channel. In addition, access to Thunderbolt is simply closed to any laptops on the AMD platform. But fortunately, there is a better solution: in ROG Flow X13, eight PCI Express 3.0 lines were simply brought out, and you can already live with this.

Naturally, a laptop with features such as the ASUS ROG Flow X13 may not be cheap, but if you look at the lower-end configurations of the machine with an AMD Ryzen 7 5800HS processor, 16 GB of RAM, a 512 GB SSD, and a 1920×1200 screen, the starting price is $1,700. it looks adequate. But the top models of the series, especially with a docking station, already pull in an impressive amount up to $3,900

The first thing that attracts attention in the design of the ASUS ROG Flow X13 is the screen, or rather its proportions. Unlike most compact ultrabooks that have 14-inch 16: 9 panels, the ROG Flow X13 has a 13.4-inch 16:10 aspect ratio screen. As a result, the screen real estate is used more efficiently in work applications, and the bottom padding did not have to be increased to create space for a familiar touchpad size. The screen is touch-sensitive, which means it is laminated, but in bright light the glass almost does not glare due to the high-quality coating.

ROG Flow X13 is a 2-in-1 computer: the screen can be rotated up to 360 ° to turn your laptop into a tablet. The device passed the “MacBook test”: it can be opened with one hand.

The laptop case is assembled from thin plates of magnesium alloy, but the lack of rigidity is felt only in not the most critical places: for example, if it were not for the glass layer on top of the screen, the lid would be easy to bend with a screw. But the topcase, due to the tightly packed internals of the laptop, practically does not deform when typing on the keyboard. Thus, half of the work to provide the keys with a comfortable mechanic has already been done. But the keys themselves are no worse: they have a rather long stroke, and the covers instantly return to the neutral position.

There are no complaints about the ASUS ROG Flow X13 touchpad either: the glass panel is perfectly tuned and squeezes through almost the entire area, except for the very top.

The laptop comes with a stylus – an active version that registers 1024 levels of pressing force, which is powered by an AAAA battery and works in the same way as all similar manipulators: when the tip of the stylus hangs over the surface of the screen, it is followed by the cursor. The screen seems to respond as quickly to the touch of the stylus as the 60Hz refresh rate allows. And if you choose a 120-hertz matrix with a resolution of 1920×1200 instead of a 4K panel, working with the stylus will surely become even easier.

Due to the fact that the side panels of the case taper closer to the front edge of the topcase, there is little room left for external connectors: there is only full-format HDMI, one USB Type-A port, one Type-C and 3.5 mm TRS for an audio headset. Another USB Type-C is hidden under a rubber cap along with a proprietary connector, to which 8 PCI Express lanes were brought out (standardized PCI Express x8 cables exist, but from the appearance of the connector it is noticeable that this is clearly not the same). The power button on the side is equipped with a fingerprint scanner.

All USB outlets on the ROG Flow X13 are 3.2 Gen 2 compliant, and Type-C can pass the DisplayPort signal or are used to power the laptop from a compact 100W adapter – this is the maximum for USB Type-C cables.

An external ROG XG Mobile video card is connected to a laptop with a massive combined plug that occupies both an external PCI Express slot and a USB Type-C located next to it. Fortunately, the laptop does not need power through the second Type-C connector when an external video card is running – it has its own power supply unit inside. And not just a video card, but a full-fledged docking station that solves all the problems of the ROG Flow X13 with a lack of wired interfaces. The box provides the user with another HDMI connector, a full-format DisplayPort, four USB 3.2 Gen 1 Type-A format, Gigabit Ethernet and an SD memory card reader.

Due to the fact that the external GPU is connected to the laptop’s CPU through a direct PCI Express channel, and not through Thunderbolt, ASUS took precautions to avoid failures when connecting and disconnecting the docking station. The cable is fixed in the laptop connector with a lock, and before undocking, you need to disconnect the docking station through the application in the Windows notification bar. Switching between the integrated and external graphics of the ASUS ROG Flow X13, we did not encounter any problems: everything is fast and does not cause artifacts on the screen. You only need to restart some of the applications for them to detect the new GPU.

If you buy the ROG Flow X13 immediately complete with a docking station, the devices come with two bags: one for the laptop itself, the other for the external video card. Carrying an external GPU with you is not such a strange idea, since the box weighs a little less than 1 kg. And one of the cardboard spacers in the laptop box can be rolled up into a triangular stand.

The cooling system of ASUS ROG Flow X13 is designed as typical for modern ultrabooks. Slots in the bottom of the casing allow cold air to pass to the funnels of the turbine fans, while heated air exits through the grate between the topcase and the screen. But due to the high power of the components, something had to be added – another radiator and an exhaust grille on the right side.

The contents of the ASUS ROG Flow X13 are packed very tightly. The RAM is soldered on the motherboard – the benefit of the maximum volume of 32 GB is enough for any games and most working applications, and LPDDR4X in the form of SO-DIMM modules does not exist in nature. The SSD remains discrete, but it is the smallest module in the M.2 standard (2230). Drives larger than 1 TB (as in the top configurations of the ROG Flow X13) are not yet produced in this form factor.

The box with the external video card is also easy to disassemble to see how it works. Inside, we found a semblance of a low-profile desktop video card with a tangential cooler and, apparently, a copper heatsink. However, this is a special board made specifically for the ROG XG Mobile box. On one PCB, along with the GPU and video outputs, USB and Ethernet ports are divorced, and instead of a PCI Express comb, a cable is soldered to connect to a laptop. The rest of the volume in the case of the external GPU is occupied by the power supply. Incidentally, extremely powerful for its size – it is rated at 280 watts.