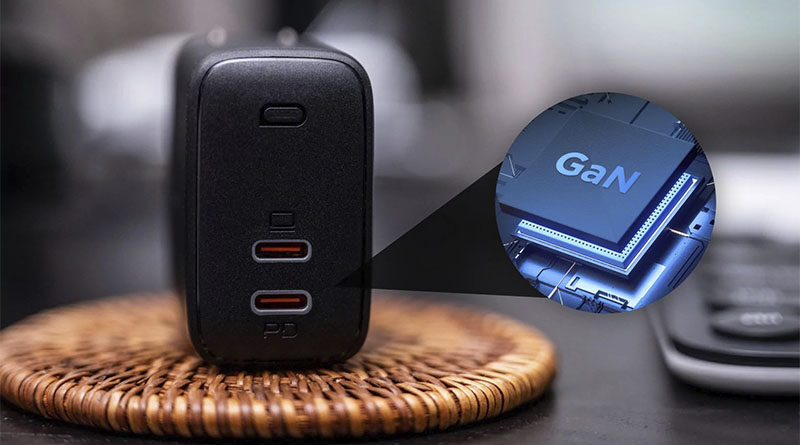 The most important advantages of GaN charger include just a couple: the most compact dimensions, as well as very high power.

GaN charger are a new type of chargers based on gallium nitride. It is used to improve energy efficiency and reduce heat generation. Parts made from an alternative semiconductor material have high thermal conductivity, high temperature resistance, and resistance to acids and alkalis. Compared to traditional battery technologies with silicon components, gallium nitride chargers are small and typically use multiple ports at once.

Advantages and Disadvantages of GaN Charger

What makes GaN chargers so many advantages

Gallium nitride has made a breakthrough in the world of power electronics. This material is becoming more popular and will soon completely replace silicon as the basis for power transmission technology. GaN chargers are able to meet the growing needs of gadgets. They are a revolution that is already happening.

Gallium nitride is a class III – V direct band gap binary semiconductor that is ideal for high-power transistors. Since the 1990s, the material has been widely used in the production of light-emitting diodes (LEDs), full color LED displays, RF components, and DVD lasers.

In 2006, transistors based on gallium nitride began to be made by growing a thin layer of this material on a standard silicon wafer using chemical vapor deposition. This process made it possible to manufacture GaN charges in the same industries as traditional silicon power supplies. Thanks to this, their cost has decreased significantly, so after a few years, such solutions have reached, among other things, the mass user market. Apparently, they will soon completely replace traditional power supplies.

Yes, an important feature of gallium nitride is its bandgap, which measures how well a metal conducts electricity. GaN has a bandgap around 3.4 eV, while silicon has a band gap of 1.12 eV. This suggests that gallium nitride can withstand higher voltages and temperatures than silicon transistors. Moreover, gallium nitride has a higher switching frequency, which allows smaller inductors and capacitors to be used in power circuits. Hence, the minimum dimensions of the power supplies and the ability to use several ports at once.

GaN chargers are by no means new from 2021. Since 2018, the same Anker has already tried to release several power supplies to the mass market, but they turned out to be too expensive for ordinary users. In 2020, already 20% of Anker chargers worked with gallium nitride. Progress.

This model in the Baseus range is one of the most interesting because of the minimum size and power (45 W), which will be enough even for charging an ultrabook. The device supports the main fast charging protocols: Power Delivery, Quick Charge 4+, and so on. The device is available in two colors: black and white. It has two outputs: USB-A and USB-C. The weight of the power supply is only 85 grams, and the dimensions are 99×32×30 mm.

This 65 W model is equipped with three ports at once: one USB-A output and two USB-C. The device is ideal for charging multiple powerful devices. Like the previous model, this one also supports all popular fast charging methods. Its dimensions are 112 × 36 × 32 mm, weight – 126 grams. Colors: black and white.

Powerful 100W PSU with four ports: two USB-C and a pair of USB-A. It supports all popular fast charging standards of course. The payment for the high power turned out to be the impressive dimensions of 92 × 30.5 × 85.2 mm and the heavy weight of 205 grams.

Ugreen’s four-port 65W PSU that offers three USB-C and one USB-A. It has small dimensions 65 × 65 × 31.8 mm, but the manufacturer does not indicate the weight.

Conclusions: when will GaN charges finally conquer the world?

GaN power supplies are a new generation of chargers that allow you to charge not only smartphones, but even laptops. Yes, most of the time you can do it at the same time. Gallium nitride is unlikely to become an industry standard in 2021. It’s all to blame for the high price, which has not yet dropped, and the distrust of users. Apparently, the time for GaN will come when the technology will be used not only by manufacturers from the Middle Kingdom, but also by recognized industry leaders like Apple and Samsung. But there is no doubt that gallium nitride is the future, and it will definitely come.