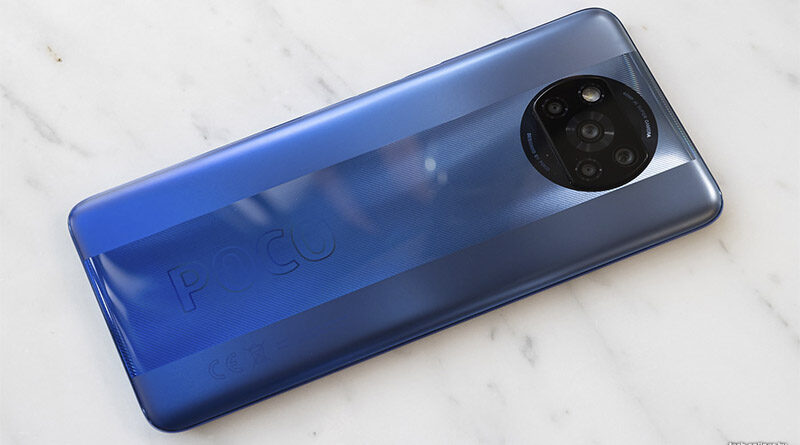 POCO was once a Xiaomi experiment. As it sometimes happens, the experiment was so successful that the Chinese manufacturer allocated POCO to a sub-brand. We got a new product called POCO X3 Pro for review. X3 Pro is designed for users who want maximum performance for minimal money. It seems that the result is a unique smartphone of its kind. But about everything in order.

The set of the POCO X3 Pro is not that very rich, but it stands out against the background of rivals at least with a transparent sticker with stickers. Not all iPhone buyers can stick up stickers – the owner of POCO can also decorate a refrigerator or a car trunk with a yellow-and-black logo of a favorite brand.

In addition to the instructions and the warranty, we will also find a transparent silicone case in the box. It is sturdy and massive. And so a rather big smartphone in it turns out to be quite huge. There is a paper clip, a cable and a huge 33 W charger.

It would be nice to have some kind of headset, but it seems that everyone has already abandoned the bundled headphones for good.

Appearance has never been POCO’s strong suit. In smartphones, the emphasis was on power, and the design can be characterized by the word “utility”. In this sense, the X3 Pro is not much different from its predecessors: it is still a massive and rather thick phone with no pretensions to high art.

Although the look this time has something to catch. The back panel is made of different types of plastic, which differ both visually and tactilely. On the sides there are two strips of matte plastic. It is resistant to fingerprints, but too simple to touch. In the middle there is a vertical glossy stripe with a small pattern, iridescent blue and the POCO brand with a holographic effect. It looks nice, but collects “fingers” with a bang.

In the upper part there is a round with a block of cameras. In fact, the protruding platform is rectangular, the curves above and below are “finished” for beauty. Dust instantly collects at the joints.

On the right side, in addition to the volume control button, the power button with a fingerprint sensor is slightly recessed into the body. It works instantly, there are no errors. On the right is a hybrid tray that can hold either two SIM cards or a memory card instead of one of them.

At the bottom we see the USB Type-C connector, audio jack, microphone and speaker. Above – an infrared sensor, another microphone and a hole for a second stereo speaker.

The POCO X3 Pro case is completely plastic, including the frame. A factory film is glued on top of the display. You can use it for six months, and then remove it and get a pristine, in fact, new screen.

The device feels very good in the hand. In the sense that 215 grams are heavy on the wrist, and the almost centimeter thick and solid width enhance the sense of size.

In general, we have an outwardly quite ordinary smartphone in the middle price category. However, the developer does not position the POCO X3 Pro as a stylish thing, and they expect something completely different from this series.

The matrix is IPS, the diagonal is almost 6.7 inches, the resolution is 1080×2400 pixels. All this is already enough for a smartphone of the middle price segment. But POCO went further and installed a fast matrix with support for 120 Hz refresh.

The interface feels particularly smooth thanks to the high refresh rate of the screen. But we must understand that, in addition to it, this smoothness will practically not manifest itself anywhere: we need support for third-party applications, and developers are in no hurry to provide it. The same goes for games: the refresh rate will not exceed 60Hz.

And yet, the very fact that a mid-range smartphone has a high-speed matrix is pleasing. What until recently was the privilege of top flagships is now available in relatively inexpensive phones.

Otherwise, there are also no special complaints about the screen. In the sun, glare interferes, but this is rather the fault of the factory film, which we did not dare to peel off. Because of the sun, I would also like a little more brightness margin.

That, in fact, is what they buy POCO for. Why give wild money for officially named gaming smartphones, if you can buy the same thing twice as cheap, just without the extra LEDs and aggressive (strange) design?

The Snapdragon 860 chip installed in the smartphone is not the flagship one today. There are several variations of the Snapdragon 865, as well as the 888. However, it is almost impossible to find devices with these chips on sale. So the 860th can be considered a top.

The Snapdragon 860 is manufactured using a 7-nanometer process technology. The computing processor is represented by the architecture 1+3+4 that is, one high-performance Cortex-A76 core running at an increased frequency of almost 3GHz, plus three Cortex-A76 cores with a frequency of 2.42GHz and four energy-efficient Cortex-A55 cores with a frequency of up to 1.8GHz. The difference from the Snapdragon 855 is just in the slightly overclocked most powerful core. The graphics subsystem of the Adreno 640 also increased in frequency.

All of this has resulted in some performance gains over the Snapdragon 855. In the AnTuTu benchmark, the smartphone knocks out more than 550 thousand. “parrots”. Of course, in games, all this beauty manifests itself in full — high settings and fps in any projects.

At the same time, the Snapdragon 860 in the POCO X3 Pro is characterized by significant trottling. A few minutes after running the corresponding benchmark, the processor performance drops by half. Note that in the hour-long PUBG session, trottling did not manifest itself in any way. Most likely, you will not be able to catch it in other games. This is because in game projects, the graphics chip is much more important, and not the computing processor, which does not have time to heat up to the limit values.

On sale there are versions of the POCO X3 Pro with 6 GB of RAM and 128 GB of internal memory, as well as 8 GB of RAM and a 256 GB drive. We had a more affordable modification in our tests.

POCO smartphones are primarily about power. Devices of this line were never positioned as camera phones. POCO X3 Pro shoots normally, but it is obvious that the developers did not particularly sweat over the photo capabilities of the smartphone.

Formally, there are four photo modules. However, two of them, consider, only for beauty and harmony: this is a 2-megapixel depth sensor and a super macro. “Real” cameras are also two: the main 48-megapixel and ultra-wide-angle at 8 MP.

The interesting thing is that both sensors can shoot in night mode. However, the difference between normal and night modes is not very noticeable. Otherwise, everything is predictable. With good lighting, we get decent quality images, and with a lack of light, both in night mode and without it, the detail still suffers.

In general, it is clear that the POCO X3 Pro was not going to make a station wagon, in which everything is fine: the design, the “interior”, and the cameras. Otherwise, why would the flagships be needed?

The battery is generous — at 5160 mAh. The autonomy is just as generous. During my tests, the POCO X3 Pro lasted two days, and there is still a little charge left. At the same time, the operation was not the most severe, but also by no means gentle. Benchmarks and games were launched, and the Internet was constantly active. I think that desperate gamers can land the battery in a day, but in more or less adequate use, the smartphone will last two days without any problems.

A complete 33W charge will charge the battery in about an hour. Too bad there’s no wireless charging. Another nuance, designed to distinguish the mid-level flagship from the top.

The POCO X3 Pro is a unique and one-of-a-kind smartphone. He can’t even pick up competitors, because for that kind of money, you can’t find devices with a similar or more advanced chip. Maximum power for your money.

It is stupid to make claims to the model about not the best camera or the lack of mongrel charging. All these little things are a small price to pay for the opportunity to get a relatively inexpensive phone with flagship hardware. That’s why they love POCO. It seems that the POCO X3 Pro is destined to become popular.