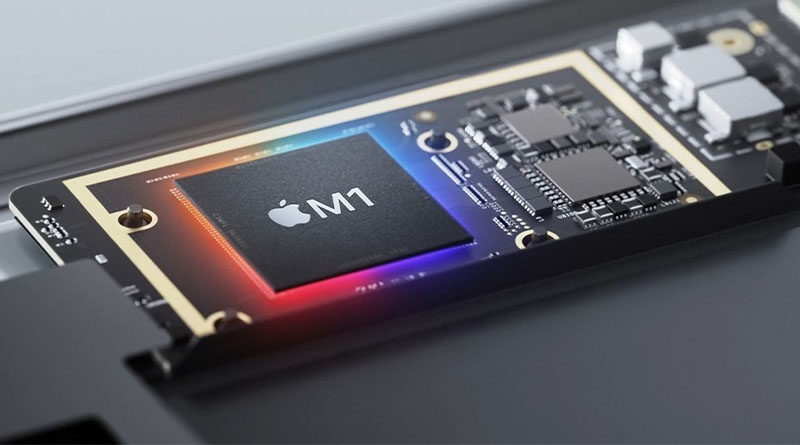 Since November 10 of last year, Apple began the transition to its own system on a chip Apple Silicon. The company abandoned Intel processors, spoiling the mood of its bosses a lot, and set off on its own voyage. The Apple M1 chip turned out to be successful: performance and autonomy have increased, and for the consumer this is the most important thing. Here’s a good thing to know about how Apple did it.

For a long time, Intel’s performance for the Mac has been top notch. But in recent years, Intel’s processor roadmap has become less interesting in terms of power gains. Although Apple assures that the decision to change the “heart” in the “Macs” is not connected with this.

“It’s about what we can do, not what someone else cannot do”, said Greg Josviak, vice president of marketing for the company, in an interview.

Apple does not outsource the chips, which allows for really tight integration with the software and operating system. Therefore, a large analysis of the typical workload for a Mac was carried out, from which the development of the chip was based.

Apple M1 looks like smartphone chips, although it debuted on a MacBook

The Apple M1 is built on the ARM microarchitecture that is used in smartphone chips and has been used by Apple for years in the development of A-series chips for iPhones and iPads. Mobile chips are a system on a chip – conventionally, many different chips under one cover.

On a PC, we are accustomed to the fact that a computer ultimately consists of a motherboard, in the dedicated slots on which a processor, RAM sticks, a video card, and drives are installed.

Mobile systems on a chip (SoC) are made in the form of a single chip, which is soldered to a printed circuit board. This chip contains:

Apple M1 is not a processor

The Apple M1 is Apple’s first and somewhat unique chip for Mac computers. This is not a processor, but a chip, a system on a chip that includes several different components.

The Apple M1 chip contains eight cores of the central processor: four are sharpened for productive tasks under load, another four for energy-efficient operation. This is already a classic scheme for many mobile chips in modern smartphones.

Besides the brain, there are other components in the chip that help the entire system function. First of all, it is an eight-core graphics accelerator. Some base models have seven graphics cores in the chip.

There is a Secure Enclave coprocessor that replaced the compromised T2 chip in Macs with Intel and moved under the M1 cover. It also houses a neural network engine, a unified memory architecture (RAM), an SSD controller, an image processor, an encoding / decoding engine, and a Thunderbolt interface controller – all on the same pad.

The Apple M1 is built on a state-of-the-art 5nm process with 16 billion transistors. This means that it has fewer transistors that are responsible for operations, more of them can be placed on the site and they will consume less energy.

The foundation for the Apple M1 was all those developments in the field of intellectual property that began to be laid a decade ago with the first processor, then a graphics accelerator, then an image processor and a neural network engine.

A few years ago, Apple decided that it was time to build its own desktop chip on all this foundation, and the Unified Memory Architecture would allow the business to scale.

On the Internet, you can find many tests of Apple laptops on the M1, which are compared with the top models of previous generations on Intel. They left only positive impressions.

One of the clues lies in the new system memory architecture that Apple used in the M1 chip. As mentioned above, the chip contains not only the central and graphic processors, but also the system memory.

The RAM in a chip is a single pool that is available to all M1 components (in particular, the CPU and GPU, the neural network engine) and is located very close to all of them. And when graphics cores need data that were previously used by processor cores, they do not need to be copied or cached from one part of memory to another, allocated directly for working with graphics. The GPU simply accesses the same chunk of memory that the CPU was using.

“We not only got a huge advantage in the raw performance of our GPU. Equally important, thanks to the shared memory architecture, we didn’t constantly move data back and forth or change formats, which slowed things down. We’ve got huge performance gains”, says Jony Sruji, Senior Vice President of Hardware Technology.

New MacBook motherboards don’t have a memory slot or space for this chip to be soldered. The memory is in the same Apple M1 chip. For the layman, this means that he chooses a computer with a certain amount of RAM and cannot make an upgrade in the future.

IFixit specialists took apart the new “poppies” and showed how this integration of memory into a chip looks like. Two small LPDDR4X memory chips from SK Hynix are soldered next to the chip on one contact pad, but not covered with a heat-conducting cap. Looks a bit unusual for those who are used to classic stones from Intel and AMD.

Apple did this not to annoy users, but to dramatically increase productivity. Chinese specialists have already learned how to unsolder memory chips and replace them with more capacious ones. However, in the process of such an upgrade, there is a serious risk of ruining the entire chip. So most MacBook owners will not dare to do such a trick.

While the main models of computers from Apple on the new chips have 8 and 16 GB of combined memory. For some, this may be a problem, although from my personal experience of processing videos in 4K I will say that Final Cut from the “Yabloko” works great with such heavy files on a MacBook Pro with Intel Core i5 and 8 GB of RAM. Probably, in the next and more powerful iterations of the Apple Silicon chip, we will see an increase in the amount of RAM.

Another important key to the success of the Apple M1 is the development in the microarchitecture of the central processor, which Apple has been honing for many years on mobile chips for the iPhone. The latest current A14 chip is the eighth generation of the 64-bit microarchitecture family that Apple debuted in the A7 chip for the iPhone 5s.

The company doesn’t really talk about what’s going on under the hood of its chips. AnandTech experts using their own microbenchmarks have determined that the Apple A14 chip has eight decoders, while Intel and AMD processors on the x86 architecture have four decoders. These decoders deal with instructions coming from memory for the processor. Instructions are provided by the operating system and programs. Instructions are variable and fixed length. The ARM architecture has fixed-length instructions, while the instructions for x86 processors are variable in bytes and are more difficult to decode.

As a result, in the Apple A14 chip, it is easier and faster to “feed” eight decoders with instructions in parallel. In addition, Apple’s developments have a much larger buffer of decoded instructions that can be “parked” while waiting for their processor cores to execute. And experts believe that in the case of Apple M1, we have a similar situation.

There is no doubt that Apple is preparing the next generation of its chips, which will probably be called the M2. There are rumors in the industry that the new chips will debut in the second half of the year in new MacBook Pro models. It is said that TSMC, Apple’s contract manufacturer of chips, has already begun mass production.

According to the insiders of the financial publication Bloomberg, now in the basements of Apple, engineers are working on projects of chips with 16 productive cores and four energy efficient ones. For higher-end desktop Mac Pros, variants with 32 performance cores are being tested. The octa-core M1 offers excellent performance. Their followers must be even more powerful.

The M2 is speculated to debut in 14- and 16-inch MacBook Pro models. These will be significantly redesigned laptops that will lose the Touch Bar, receive a new design and more specific ports – for example, a card reader for photographers and videographers, who will finally be able to abandon some of their adapters.

In addition, rumor has it that the M2 may appear in the iMac with a larger screen diagonal. The company recently announced 24-inch models on the M1. There was also an iPad Pro tablet on the Apple M1. Over the next two years, the company intends to migrate all of its products to this system-on-chip.

Introduced last fall, the Macs are some of the fastest in Apple’s history. But they will probably be the slowest Apple Silicon-powered Macs the company will ever introduce.